If cookies are an all-American classic then macarons are definitely France’s choice confection. These meringue-based treats have become an embodiment of Paris, being chic, pricey and associated with luxury. I could never achieve my goal of becoming a Parisienne without learning how to make this quintessentially French dessert, luckily Bénédicte from The Parisian Kitchen was there to help!  I teamed up with a bunch of other Expat bloggers, armed with whisks and baking trays we mastered (sort of) the art of macaron-making. 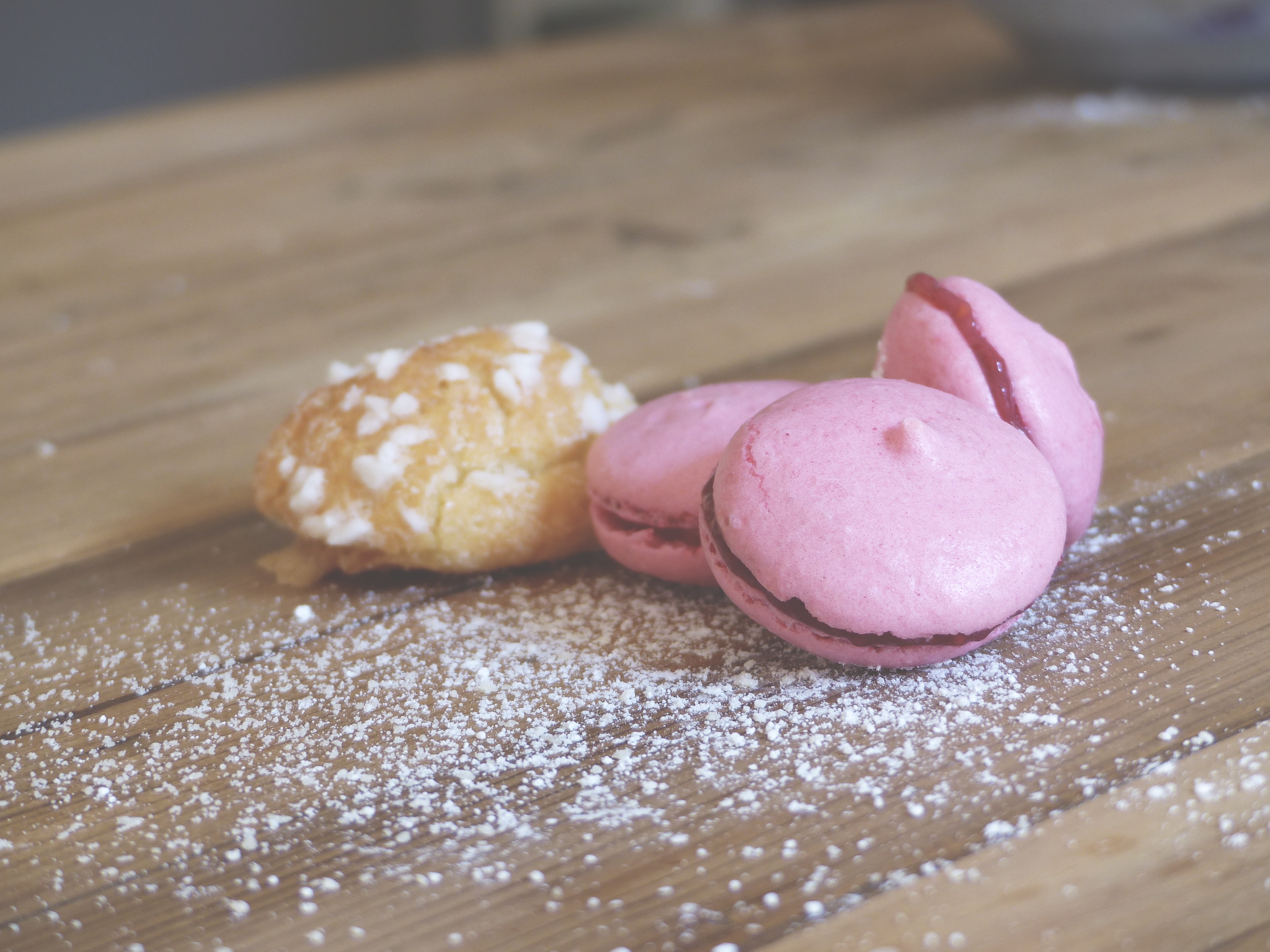 Travel writer Deborah Carter once asserted that “You have to taste a culture to understand it.” And boy were we about to understand the French culture. 3 plates of it. Standing by the metro station Villiers, I waited for the four lovely ladies I was to spend the afternoon with. They arrived, one by one, and I discovered that I would be making macarons with Anne, Celina, Jocelyn and Melissa, all American and all lured to Paris by its timeless glamour. We arrived at our hostess Bénédicte’s sun-drenched apartment in the chic 17th arrondissement at about 2pm. Bénédicte’s background in the French Luxury industry not only comes through her cooking, but through her apartment too. It is effortlessly chic, with the crisp white walls meeting ornate mouldings on high ceilings. Fans of Parisian architecture will not be disappointed with the added French flair of parquet floors and a wrought iron balcony. 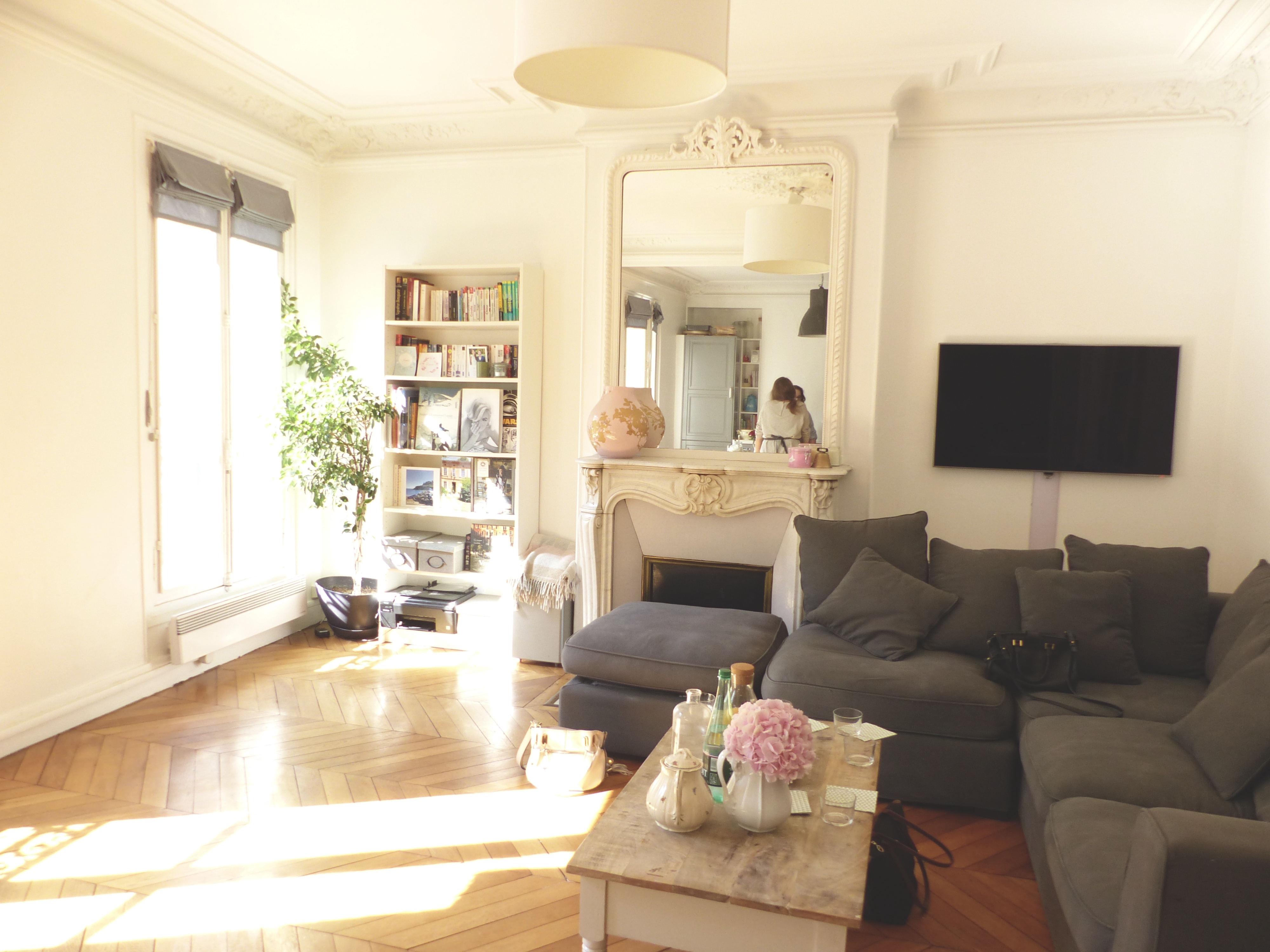 Our hostess had lovingly prepared a spread of homemade chouquettes, mini-meringues and tea. This was the perfect chance for us all to get to know each other a little better before attempting the seemingly impossible task of recreating Ladurée’s famous sweet treat. 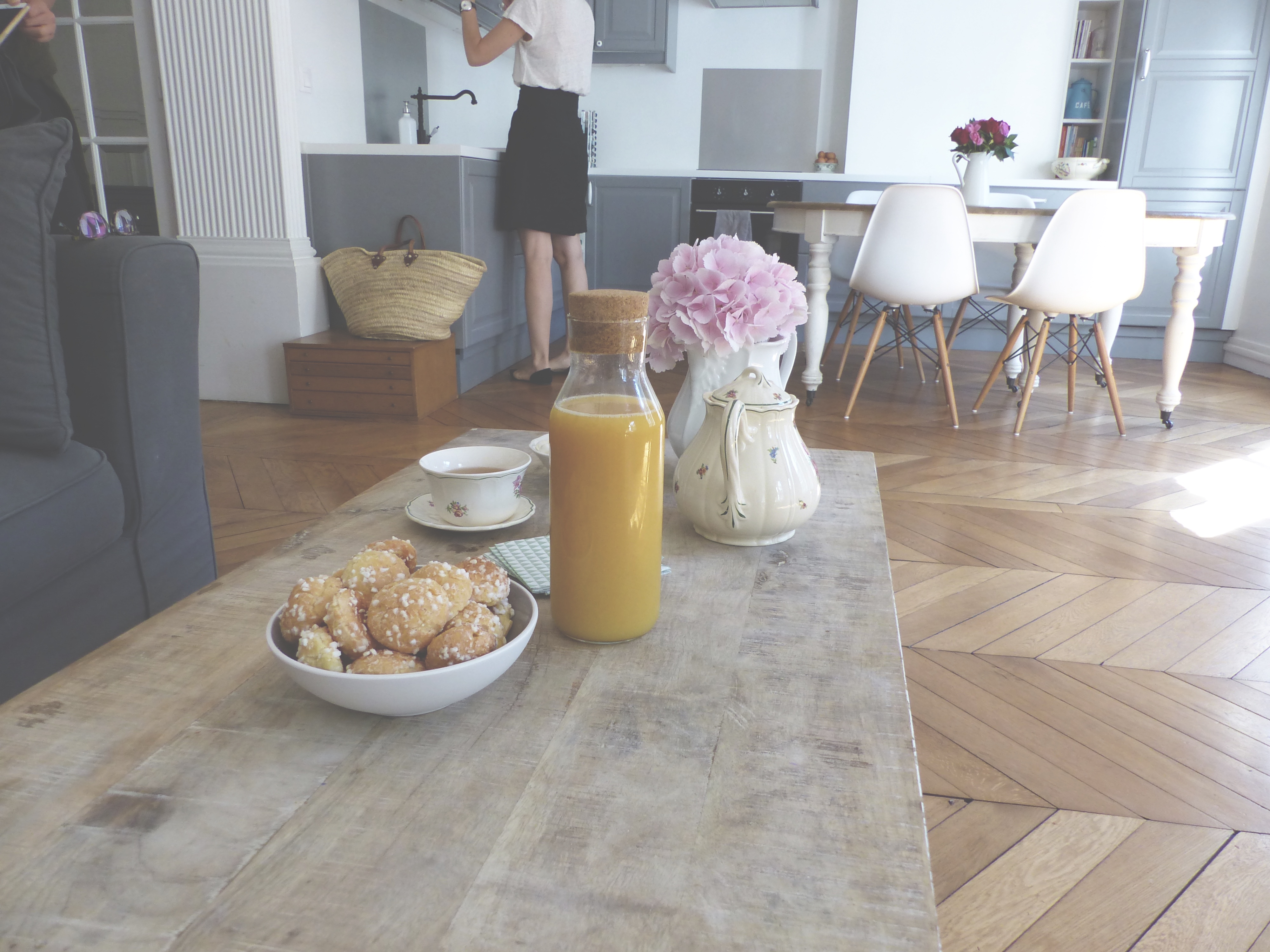 Once names were memorised, teas were drunk and mini-meringues eaten, we gathered around the rustic round table of Bénédicte’s apartment, eager to hear the secret to macaron-making. “It’s actually not too complicated.” Bénédicte said to us, a group of now bewildered bloggers. “It’s just sugar, ground almonds and egg whites”. Armed with some scales, a sift and the knowledge that all macaron bases are the same (it’s just the filling that gives them their flavour), we began to craft our luxurious little treats. 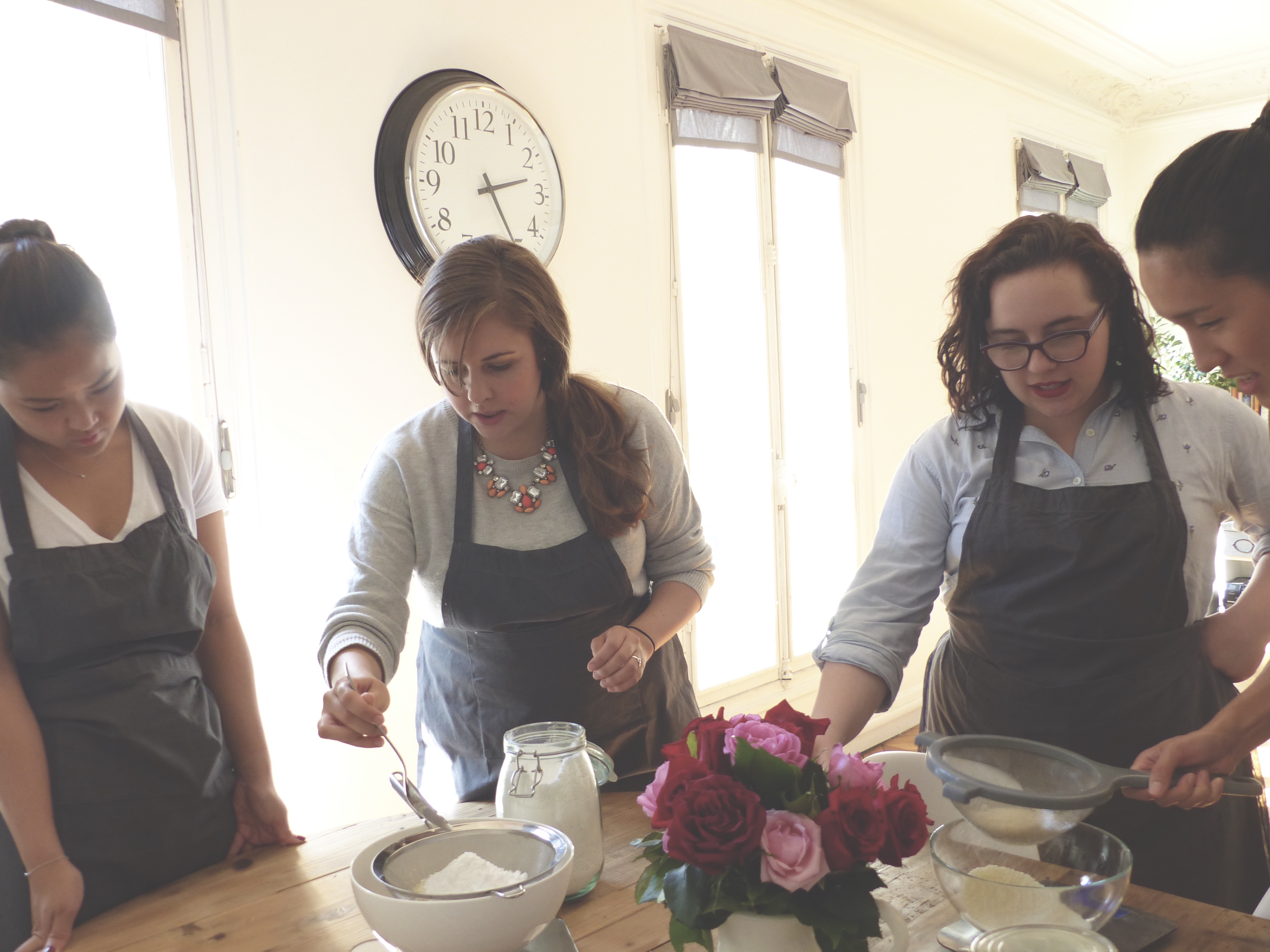 With the mixture ready and sporting the vibrant colours of pink and yellow, it was placed in piping bags, and squeezed onto pre-drawn squares. Bénédicte, picking up the baking tray, said “this is the secret to getting perfectly formed macarons” and then dropped the tray onto the table. The loud clang rang through the apartment, she repeated the action, stating that it was a great way to get the best shape for the macarons. 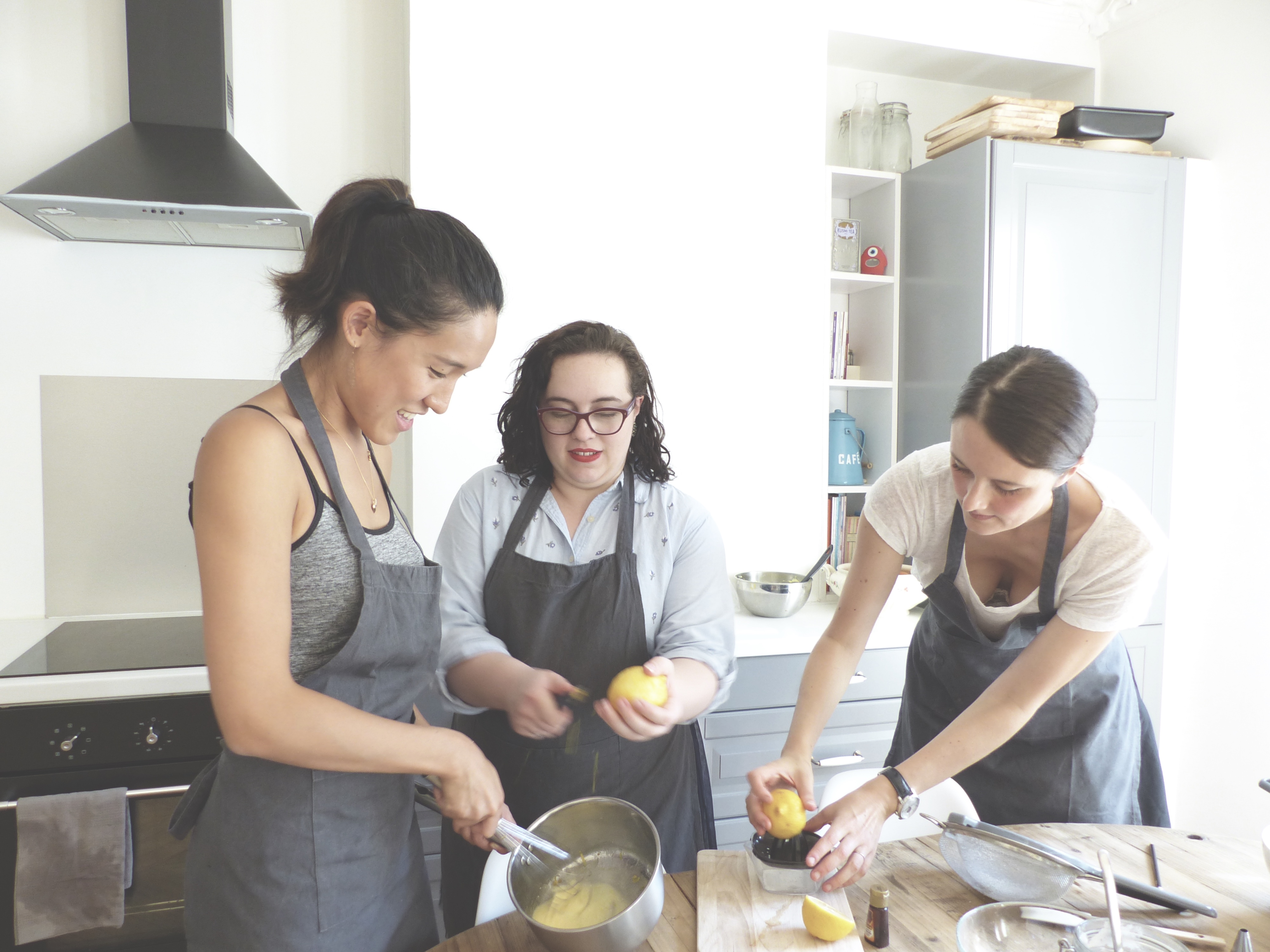 Once the base was ready, it was time to make the best bit -the filling. Using fresh lemons and real raspberries, we stirred, peeled and whisked away, laughing while we spoke about the differences between the USA and France. They revealed their reasons for moving to the capital, what they missed from back home, and listened to Bénédicte’s own story. Our hostess has lived on the same street her whole life, making her a bonafide Parisienne and expert in the area. After sandwiching the filling between the macaron bases, we took a seat, ready to enjoy the fruits of our labour.

This 3-hour macaron-making class in Paris ended in true French fashion, with a bottle of champagne. Conversation was as free-flowing as the bubbly, and we arranged to meet up again post-macaron experience!

4 thoughts on “A Macaron Masterclass in the French Capital”

A London-born lifestyle blogger, obsessed with Paris. I write lifestyle posts with a French chic twist.

There was an error retrieving images from Instagram. An attempt will be remade in a few minutes.